“What’s your name,’ Coraline asked the cat. ‘Look, I’m Coraline. Okay?’
‘Cats don’t have names,’ it said.
‘No?’ said Coraline.
‘No,’ said the cat. ‘Now you people have names. That’s because you don’t know who you are. We know who we are, so we don’t need names.”
-Neil Gaiman 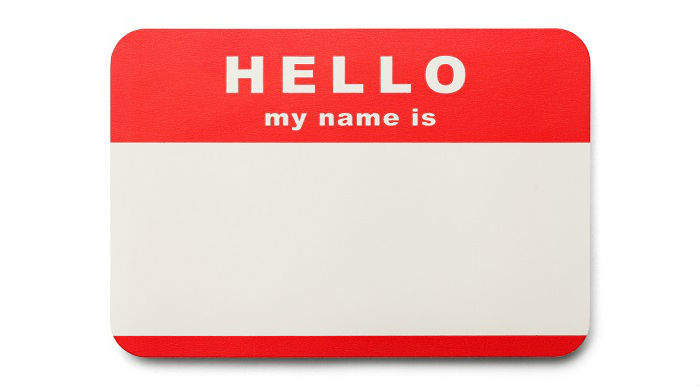 I’ve been thinking about the words we use to distinguish ourselves, linguistically, from one another. Names. Now I know you’re expecting me to break out some hackneyed Shakespearean floral references, given my penchant for literary quotation. But I’m not going to do it. Nope.

As with most of my subject matter, this topic happened to come up incidentally in a couple of different contexts. In the first place, I was pondering the concept of the pseudonym. The nom de plume. Like many aspiring writers, even to those for whom publication will remain a pipe dream, (*ahem* yours truly included) there are daydreams of book covers. Lovely hard-bound volumes tastefully emblazoned with one’s name. But I’m not entirely sure that my printed creations should be labeled with the same drab old thing that’s on my driver’s license.

I suspect that my mental protest is twofold. One, I don’t particularly cherish my name in the first place. It just smacks of wholesome naivety. It’s a moniker that should belong to a large complacent farm dog. Not my style. If you follow me on Twitter, you have heard me gripe about this particular association before. No, I’d rather have something sleeker and more sophisticated. Perhaps somewhere in the recesses of my mind, I believe that I would be different. Less clumsy awkwardness, more cucumber-level coolness.

The second factor lies in the fact that I don’t really feel as though I own my name. And here’s where the oft-discussed fact of the matter arises. We are bestowed with a title by a parent. It isn’t something we choose, nor does it necessarily reflect who we are. Unless of course the nature of our name plays a role in the development of personality. Which, I tend to think has more to do with nurture by the parent who selected it, rather than the actual word itself. Yes, of course, people make a snap judgement about who you are based on what you’re called. But it isn’t simply because of the word itself. Instead, it is the cultural and social context associated with that particular name.

But, as per the usual, I digress. As a woman, the situation is only stickier, in that we have a complicated relationship with our surname, in some cases. There is a certain expectation in Western culture, at least, that the last names of women are somewhat disposable. After all, as soon as we marry, we will surely take on the identity of our husbands (to some degree). Whether or not we choose to do so is another source of judgement when it comes to public inspection.

In considering this, it occurred to me that surnames are a legacy of our male ancestors, and as such, your relationship to it is reflective of your level of familial closeness. Do you embrace your heritage? Your individual relatives? Is it something you wear with pride, or do you struggle with the desire to make your way in the world with a label of your own choosing? Shrugging off the heavy mantles of the past, do you shed your ancestral identity and start anew?

So yes, I do have a diminutive list of names that I would choose. However, the prospect of this change is met with a tiny glimmer of hesitation. Because when your name is uttered in heated whispers against your ear by someone who you hold deep within your heart, there are few things that can match that level of intimacy. The source of consternation becomes beautiful, the pedestrian driver’s license appellation becomes akin to a sacred oath. So, while I may adopt an appropriately stylish nom de plume, (one that matches the sexy hardcover non-fiction bestseller of my dreams) I will keep my name for now.

“Living so that you beautify your name, even if it wasn’t beautiful to begin with… making it stand in people’s thoughts for something so lovely and pleasant that they never think of it by itself.”
-L.M. Montgomery

View all posts by molly_brook_